Can You Get Smarter? 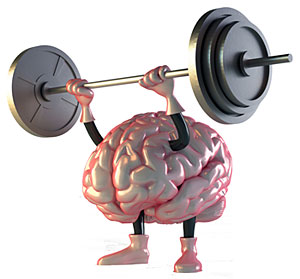 Latest research on how to delay the effects of aging on your brain  READ MORE....

“…there is no evidence that any prescription drug or supplement or smart drink is going to raise your I.Q.”

According to professor Friedman, “The very notion of cognitive enhancement is seductive and plausible. After all, the brain is capable of change and learning at all ages.  Our brain has remarkable neuroplasticity; that is, it can remodel and change itself in response to various experiences and injuries. So can it be trained to enhance its own cognitive prowess?

“The multibillion-dollar brain training industry certainly thinks so and claims that you can increase your memory, attention and reasoning just by playing various mental games. In other words, use your brain in the right way and you’ll get smarter.”

Friedman cites a study by BBC and Cambridge University neuroscientists who tested 11,430 people in popular “brain training.”  Ah that I had a fraction of the bazillions paid for Lumosity, etc. The scientists asked, ‘Do brain gymnastics actually make you smarter, or do they just make you better at doing a specific task?’ That is, can you actually transfer what you learn from playing a math game or puzzle to other problems?  The short answer: No.  However, for people 60 and older, their ability in verbal reasoning improved significantly. This is great news for Baby Boomers who are wildly seeking to delay some of the effect of aging – the hippocampus which stores our memories declines 1 to 2% per year – by doing new things that actually work to talk through issues and problems.

And so the premises of BrainStyles™ come to the fore:  Learning the limitless potential of your brain-based gifts opens up a vast territory to explore for all your life.  Add to that the bonus of socializing with appreciation for others’ gifts that can expand the people you meet and get along with is another way to keep your brain and your body healthier. And on top of that, finding friends to exercise with is the very best way to lock in those benefits.

As Friedman concludes, “In the end, you can’t yet exceed your innate intelligence. But that seems less important than the fact that there is much that you can do to reach your cognitive potential and to keep it.  Forget the smart drugs and supplements; put on your shorts and go exercise. If you’re 60 and up, consider brain training. And do it all with your friends.”

And to that we must add, Happiness can be defined as the joy, the “flow” of being in “the zone” when doing what is easiest and most natural for you to do in your brainstyle.

“BrainStyles helped me change my life to one of self-contentment and renewed spirituality. I feel in control now so I can be much more empathetic of other people’s shortfalls and focus instead on their strengths. The net result is that my relationships and career are much more successful than in the past.”